[This blog post is the opinion of Greg Nooney and not necessarily the view of the First Unitarian Church of Sioux City.] 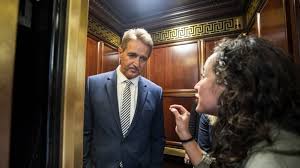 Ana Maria Archila and Maria Gallagher confronted Senator Jeff Flake of Arizona in an elevator on Friday September 28, 2018.  Ms. Archila indicted that she had planned to speak “nicely” to him but as she started talking she became angry. At one point she told him to “Look at me when I am talking to you. You are telling me that my assault doesn’t matter.”

There are conservative postings that are describing this as an example of how “the left” is becoming uncivil. Civility is being spouted by the alt-right as something that they promote even though their leader Donald Trump regularly verbally attacks and insults anyone who disagrees with him. What is missing from this conversation is the power differential. Senator Flake was standing in that elevator in a position of power. Ana Maria Archila and Maria Gallagher were standing in subjugated positions.

When the prime minister of India Indira Gandhi declared martial law in 1975, she took away civil rights and incarcerated her opponents and it lasted 21 months. Mother Teresa said: “People are happier. There are more jobs. There are no strikes.” She was being civil, cooperating and supporting the oppression. Civility in the presence of oppression is complicity.

How can we practice being uncivil in these times, practice kindness, and refrain from being nice?